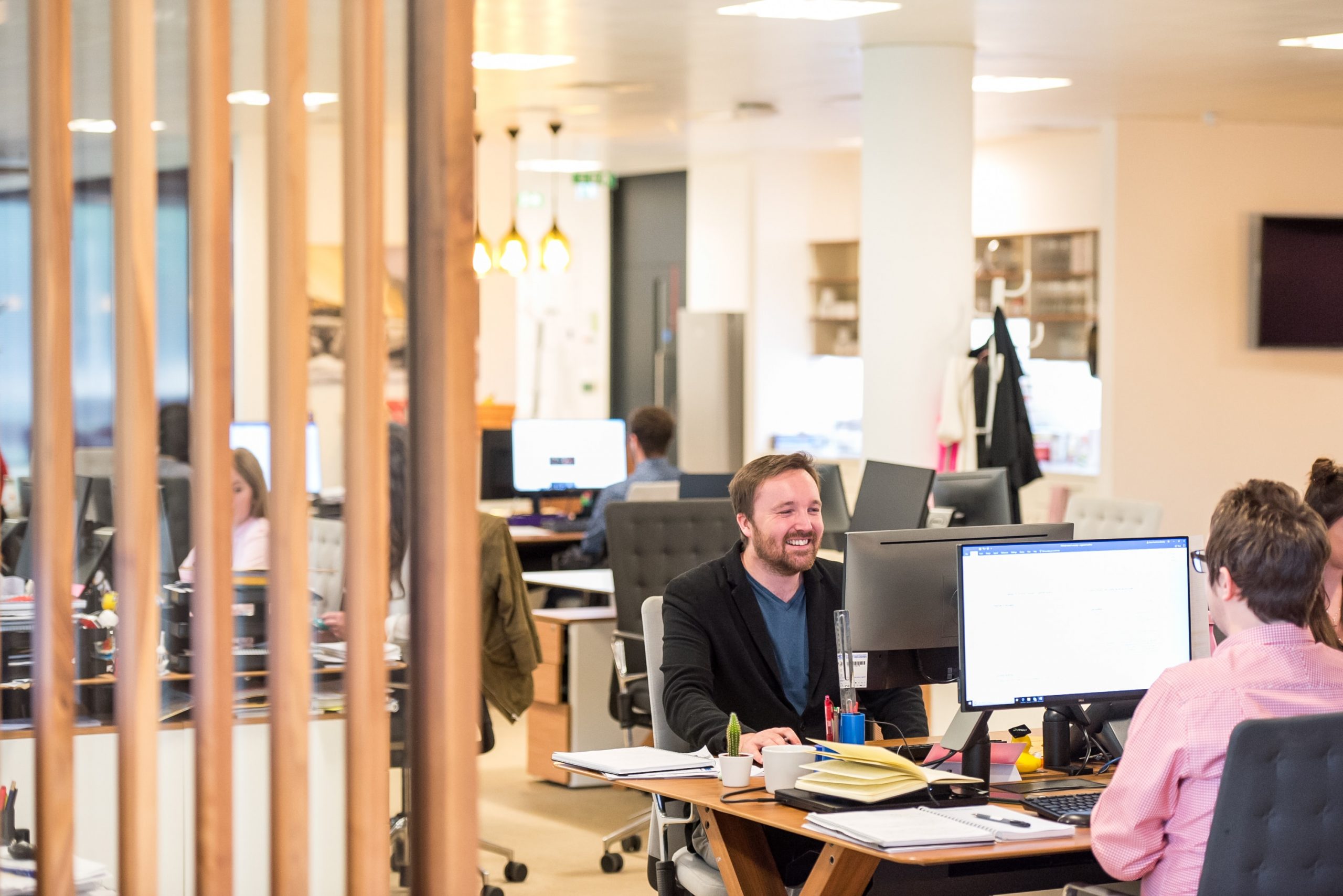 How satisfied are you with your job?

1. 64% of UK workers are satisfied with their job.

Happiness at work in the UK is a subject of hot debate, with satisfaction rates on the decline. Recent research shows that nearly two-thirds of UK workers are happy with their job, which leaves plenty of grumpy people.

If you are one of these individuals and think it’s time for a change, then search through our London job listing as there are plenty of opportunities waiting for you.

2. Levels of job satisfaction have fallen by 10% in the last three years.

3. The UK ranks poorly for job satisfaction compared to its European counterparts, with a satisfaction rating of 6.43.

Job satisfaction statistics in the UK for 2017 suggest that 47% of employees were open to looking for a new job in 2018.

Finding a job you’re passionate about is no mean feat, but 17% of UK employees apparently love their job. What’s more, 45% of people like their jobs, while 20% are indifferent. 6% of employees admitted to hating their job.

6. Appreciation is the number one contributor to job satisfaction.

Feeling appreciated ranked highest in a list of job satisfaction factors. In a survey involving 200,000 people across the UK and several other countries, appreciation was selected as the most influential happiness factor from a list of 26 options. This was followed by positive relationships with colleagues, a healthy work-life balance, good relationships with senior staff and management and security. An attractive, secure salary rated eighth.

7. Women are more likely to enjoy their jobs than men, with satisfaction rates 10% higher in UK females.

Women are more likely to be satisfied with their jobs than men, with 68% of females expressing satisfaction in comparison to 58% of males.

8. 82% of UK employees would stay in the same job longer if they had more flexibility.

Over 80% of employees would stay in a job longer and demonstrate loyalty if their employer offered them more flexible working arrangements. As more and more people look to combine working with raising children, for example, the demand for flexible hours and the opportunity to work remotely is only going to increase.

9. Employee engagement is key, with engaged employees 59% less likely to quit within 12 months.

Employees who have a good relationship with their employer and senior members of staff are much less likely (59%) to leave their jobs within 12 months than those who rarely interact with the management. Unfortunately, Forbes employee engagement stats indicate that only 13% of employees feel truly engaged.

10. Remote working is becoming increasingly attractive, with 37% of employees willing to quit to get a job that offers this option.

Almost 40% of workers admit they would be willing to quit their job if they were offered a role that enabled them to work remotely, cementing flexibility as one of the most important factors associated with job satisfaction. In that regard, careers with the most remote jobs include marketing, project management, accounting and finance, human resources, and tech jobs.

More than half of employees are searching for new jobs as a result of pay. A full 51% admitted that money was the main reason for switching roles. Pay is one of the most significant factors that influence job satisfaction, with 47% of people stating that even a small pay rise would increase their happiness at work.

12. 49% of people want to change jobs due to poor management.

Almost half of the employees who quit their jobs do so due to poor management or negative relationships with senior staff members. This is among the most common reasons and one of the most interesting job satisfaction statistics for employers.

13. 39% of employees would consider leaving a job if they felt undervalued.

Another fascinating aspect of employee morale statistics, this figure indicates just how important it is for employees to feel their efforts are valued and recognised. Almost 40% of people would think about changing jobs if they were undervalued.

14. A third of workers would quit if opportunities to progress were lacking.

Most people take jobs with a view to getting ahead and climbing up the ladder. So, it’s no surprise that a third of UK employees said they would consider leaving a job if there was no chance to progress.

15. 15% of employees quit their jobs because of the impact on their mental health.

Mental health is a topical subject for employees and employers, with high levels of stress among the workforce. In the UK, 15% of people have quit or considered giving up their job due to it having a negative effect on their mental wellbeing. The figure rises to up to 50% among millennials

This is one of the most pertinent unhappy employees statistics in an age where diversity and inclusion are buzzwords. Almost 1 in 10 people who quit their jobs do so because they feel like they’re not included or they don’t fit in at work.

Long hours are often cited as one of the most significant factors that contribute to job satisfaction rates. Currently, around 11% of UK employees work more than 48 hours per week.

Flexible working statistics in the UK indicate that working hours are becoming less rigid. However, many employees would prefer more flexible working arrangements. This should be an issue of interest for employers, as research suggests flexibility can increase productivity by up to 30%. Taking control of your own schedule and choosing where to work are among the most significant factors related to work-life balance statistics in the UK.

Jobs with the Highest Satisfaction Rates

19. Customer success managers are the happiest employees in the UK, with a satisfaction score of 4.9.

Of all the jobs with high satisfaction rates, customer success managers top the list in the UK with a score of 4.9. Sales development representatives, audit managers, managing partners, and recruiters complete the top 5. Other jobs with high job satisfaction include marketing assistants, research fellows, hotel managers, and campaign managers.

A global study of workplace statistics linked to job satisfaction found that people working in HR, tech, engineering, sales, marketing, education, and public sector roles were most likely to be happy at work. All of these professions had a satisfaction level of over 45%.

21. Job satisfaction statistics by profession show rates are lowest among those working in tourism, construction and real estate, logistics, manufacturing, and retail.

Job happiness statistics show that these occupations are ranked at the bottom of jobs with a high satisfaction rating. Just 32% of those working in tourism and restaurants, construction and real estate, and logistics are happy with their jobs.

As of 2021, the average salary in the UK is £25,971 per year. However, almost two-thirds of UK adults said they would rather have a low-paid job they loved than a better-paid role they hated. Fancy that!

23. Over 83% of employees see enjoyment as the most important marker of career success.

More than 83% of employees consider job satisfaction the most significant career success indicator, ahead of  being proud of your occupation (73.8%), making a difference to the lives of others (57.1%), working for a business you love (54.2%) and earning a top salary (42.4%)

Career Change Statistics in the UK

Almost 50% of the UK labour force would consider a change of career. Career satisfaction statistics show that young people aged between 18 and 34 are most likely to change jobs, with 66% open to taking a different direction.

It may have come as a surprise to you, but only two-thirds of UK employees are happy with their jobs.

Job satisfaction is much more important than salary for the majority of workers. In fact, many are quite willing to swap a well-paid job they hated for a job that pays less but makes them happier.

While pay is a common reason to consider leaving your job, it’s not the most important aspect.

As it turns out, more people quit due to poor management, low morale, and a lack of appreciation. The latest job satisfaction statistics for the UK indicate that most people are content with their job. That being said, there is a lot of room for improvement, with satisfaction ratings falling in the last five years. Here’s the bottom line:

As employees look for a better work-life balance, increased flexibility, an inclusive workplace, and options to work remotely, employers will have to adapt to the evolving desires and demands of the workforce.

What job has the highest satisfaction rate?

What percentage of employees are unhappy with their jobs?

Statistics of job satisfaction indicate that just over a third of UK (36%) employees are currently unhappy with their job.

For the majority of people, enjoyment and appreciation are more important factors influencing job satisfaction than pay.

Why do employees quit statistics?

Job satisfaction statistics show that most people quit due to feeling unappreciated and undervalued. Other factors include wanting to earn more, finding a better work-life balance, poor management and a lack of opportunities to progress.